The Society For
Matriarchal
World
DOMINATION 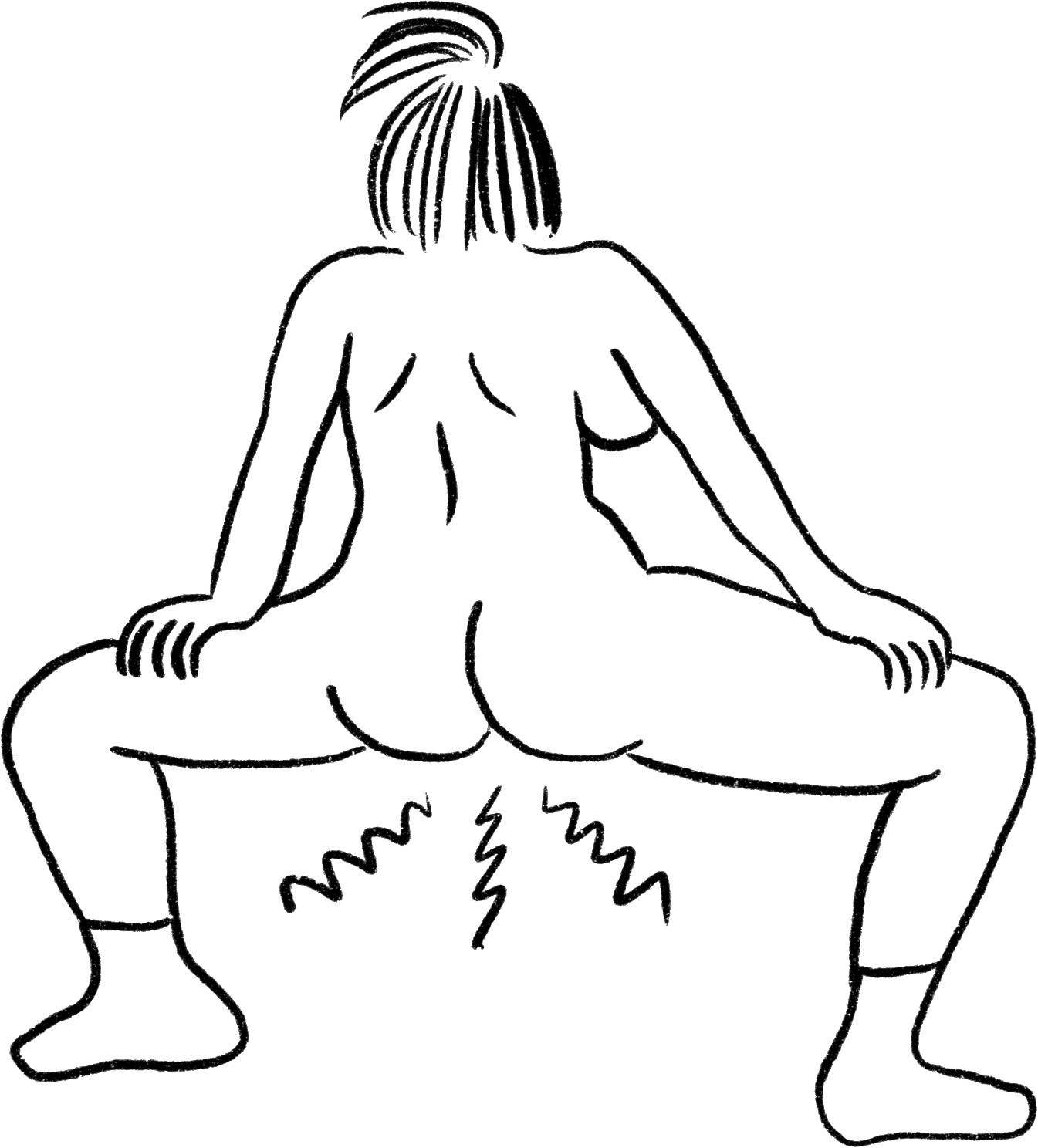 One blue back paper at a time, the Society for Matriarchal World Domination is flyposting for the end of the patriarchy. Artists and writers from diverse backgrounds collaborate in pairs to conceive posters that appear on billboards in the streets of Berlin every full moon. Following this monthly cycle, the posters address a radically indiscriminate audience in the theater of public space using text and images to speak to a plurality of feminist issues.

Supported by the Senate Department for Culture and Europe 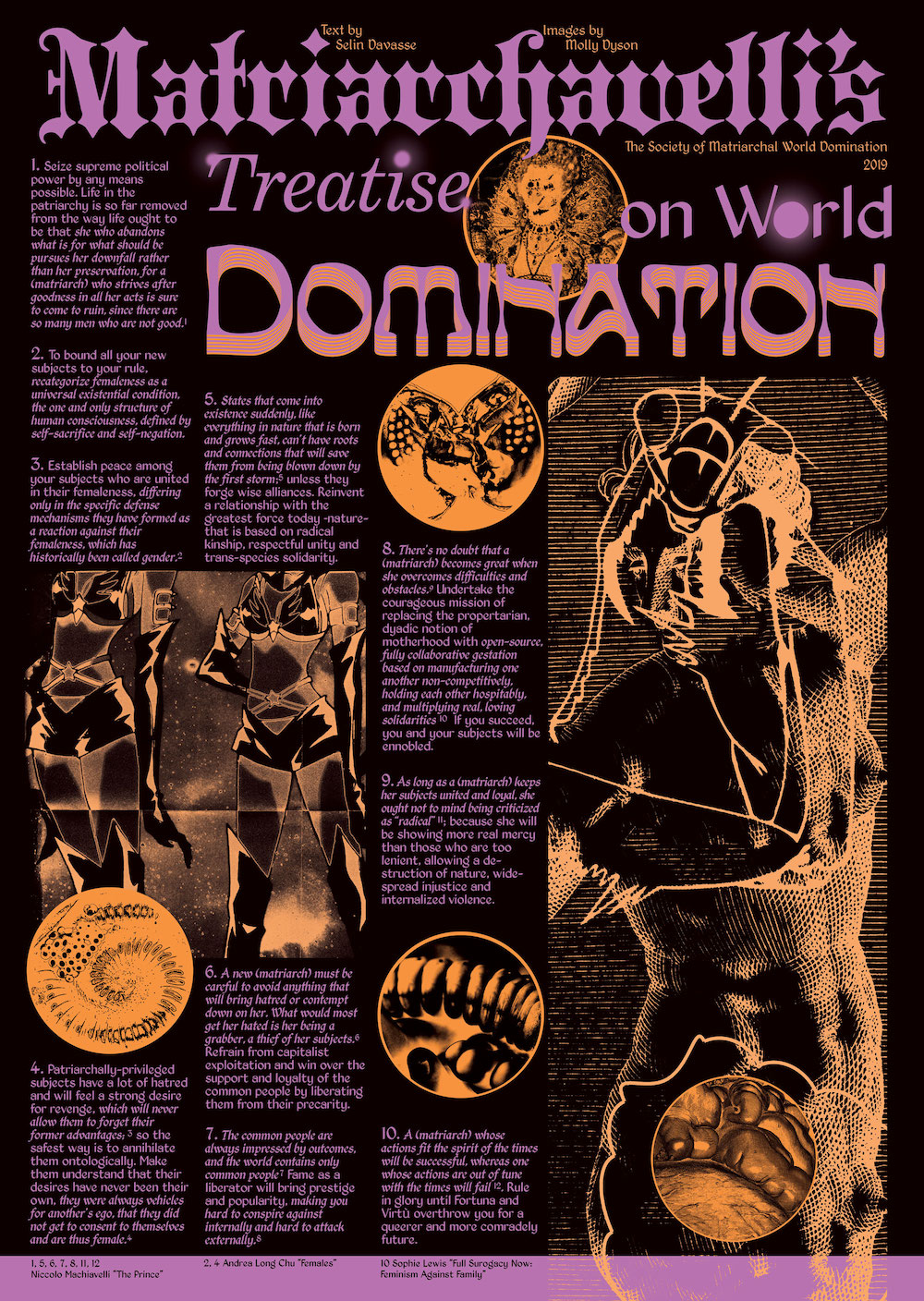 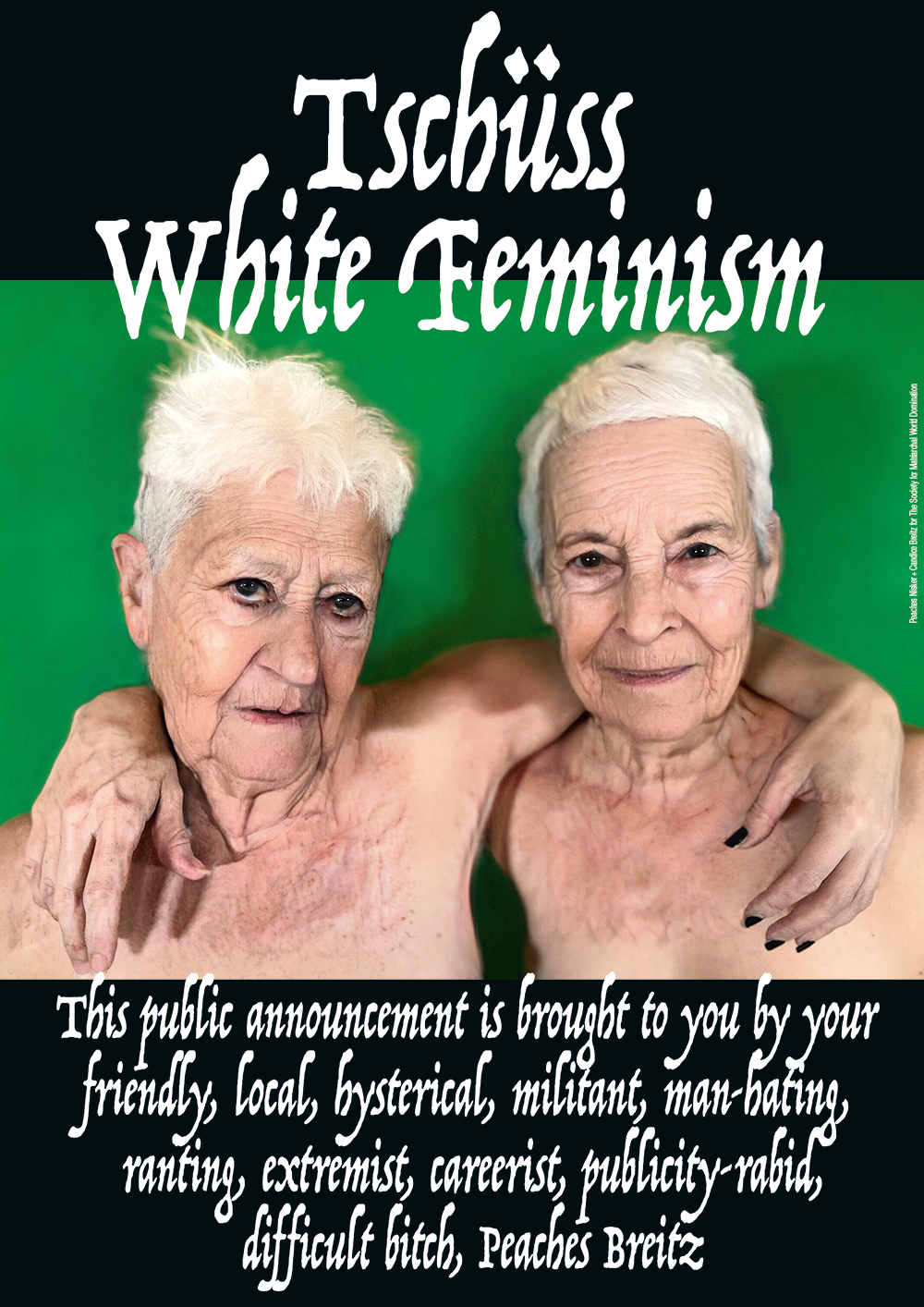 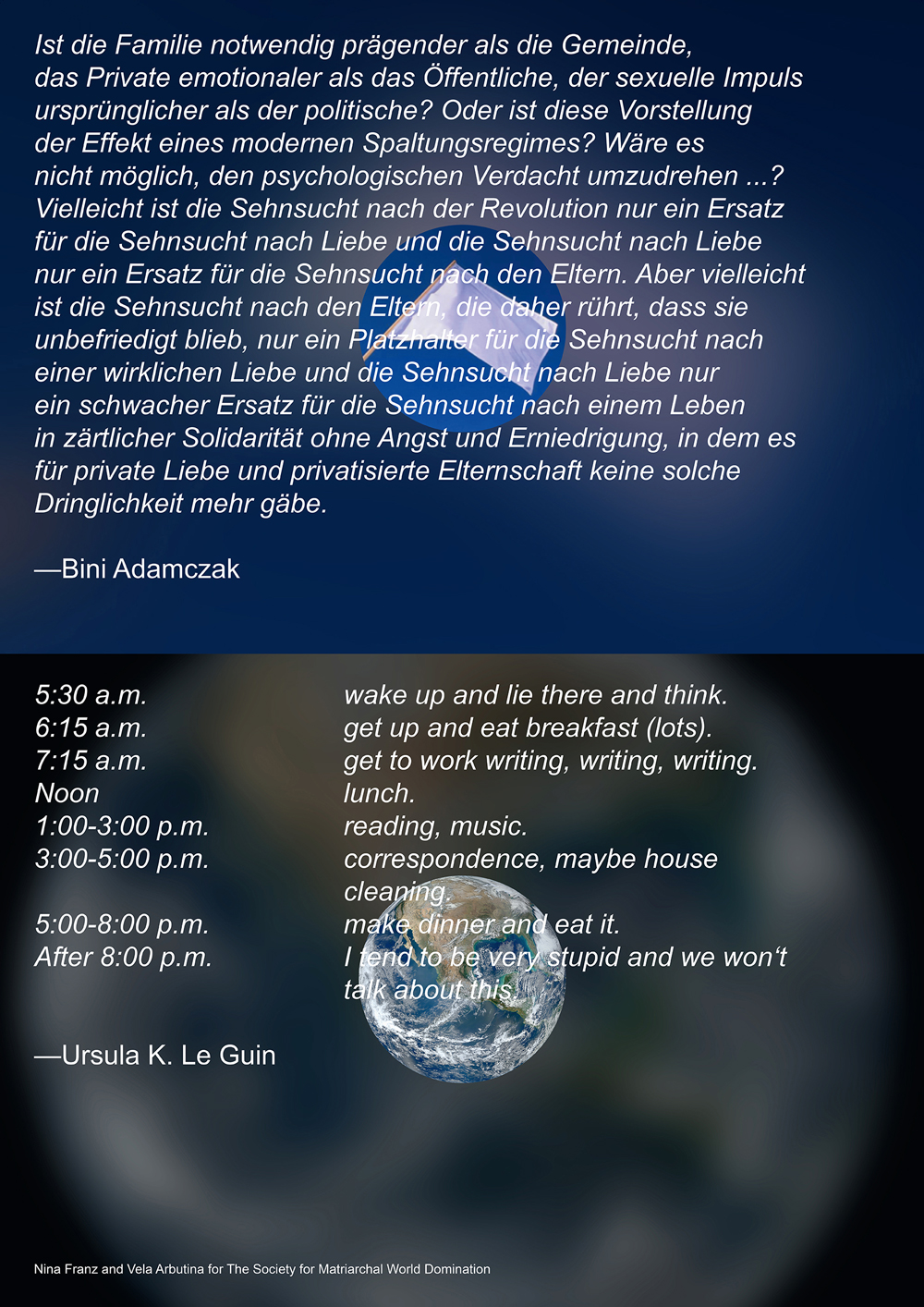 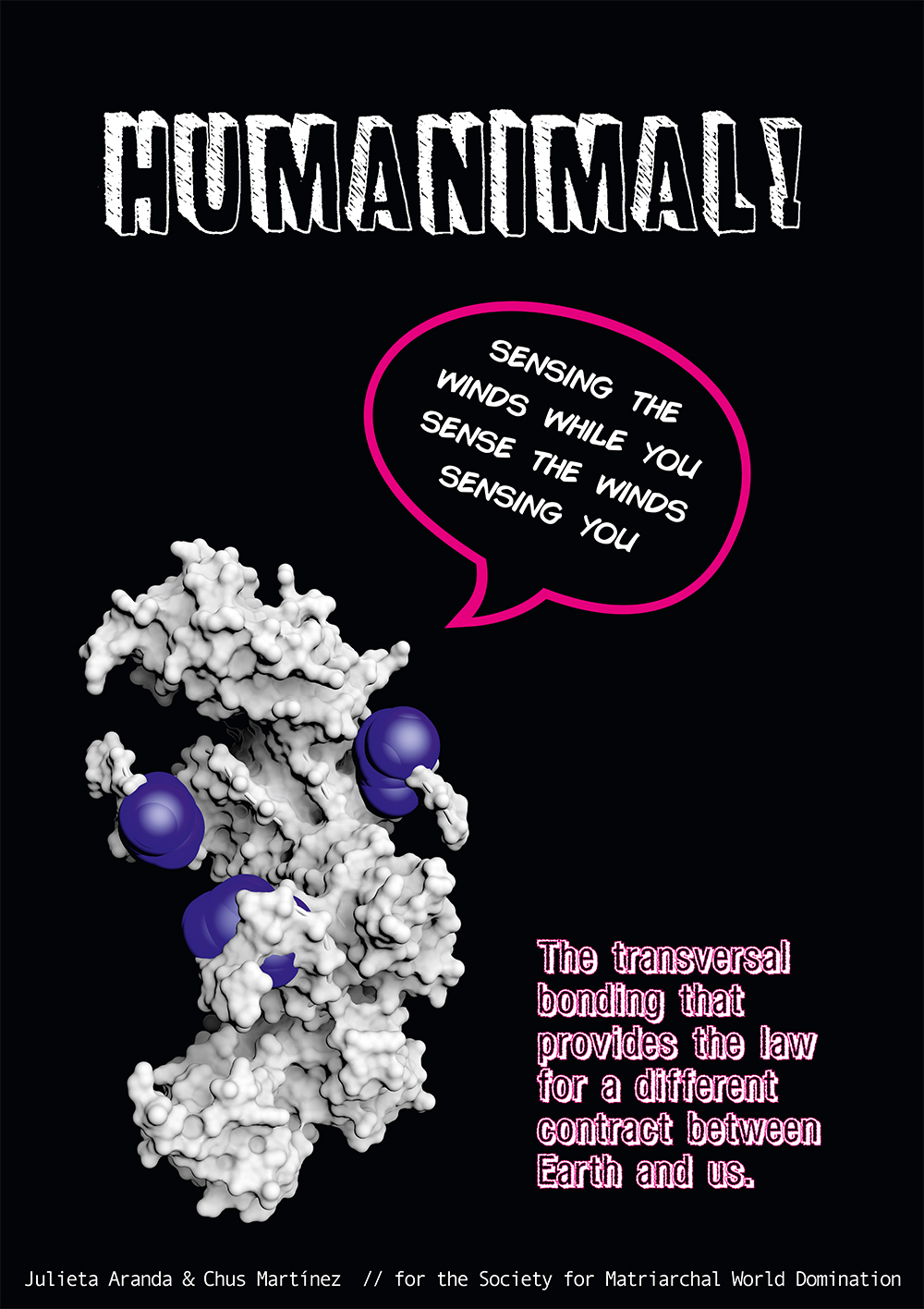 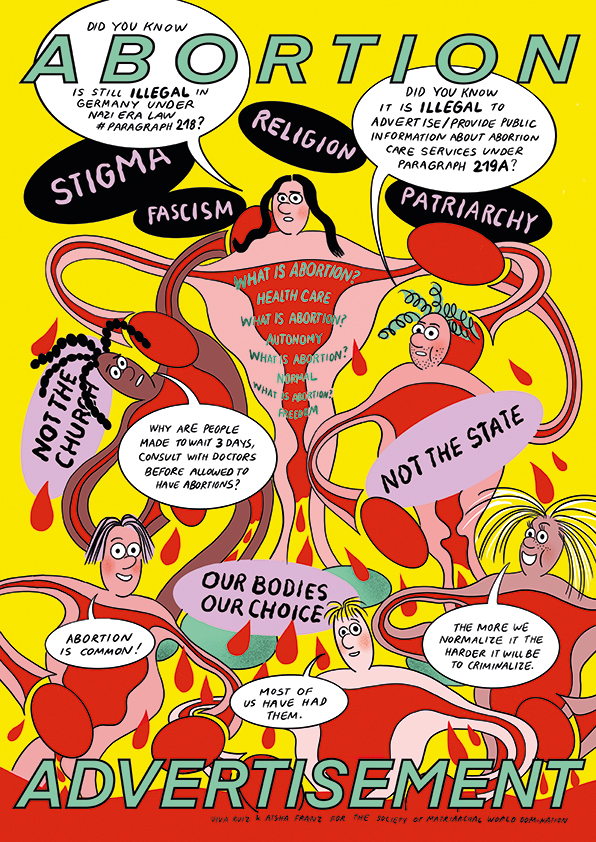 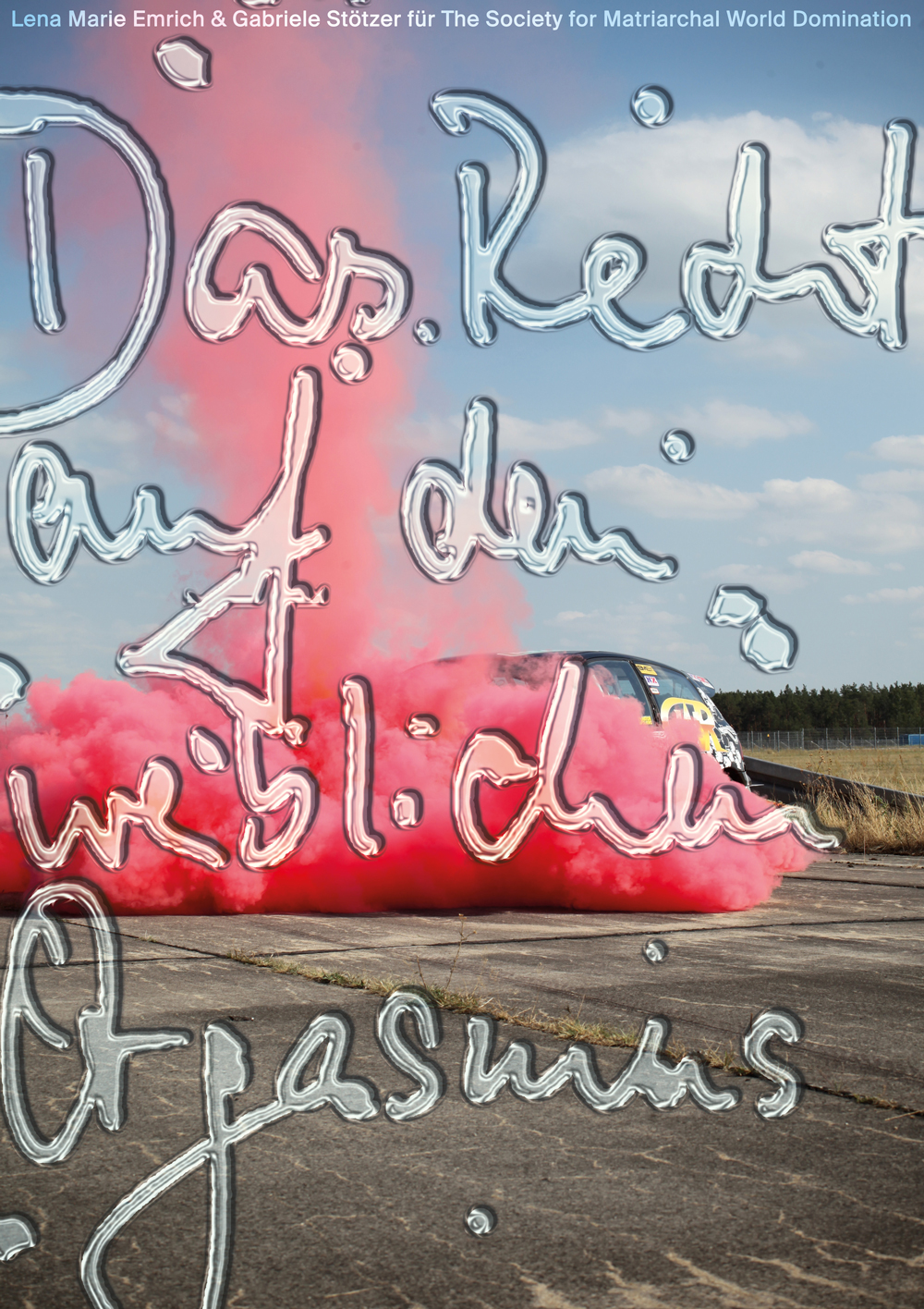 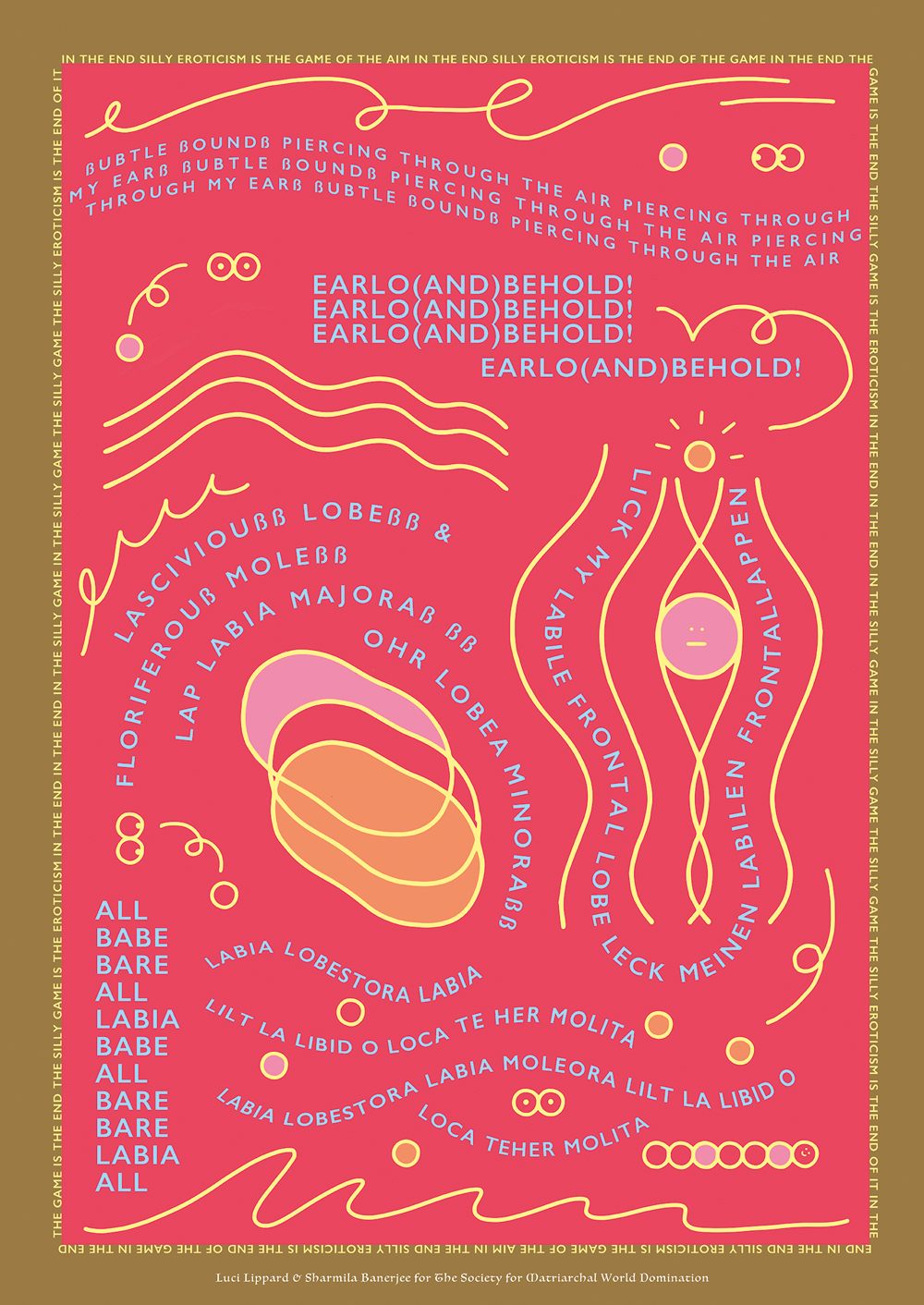 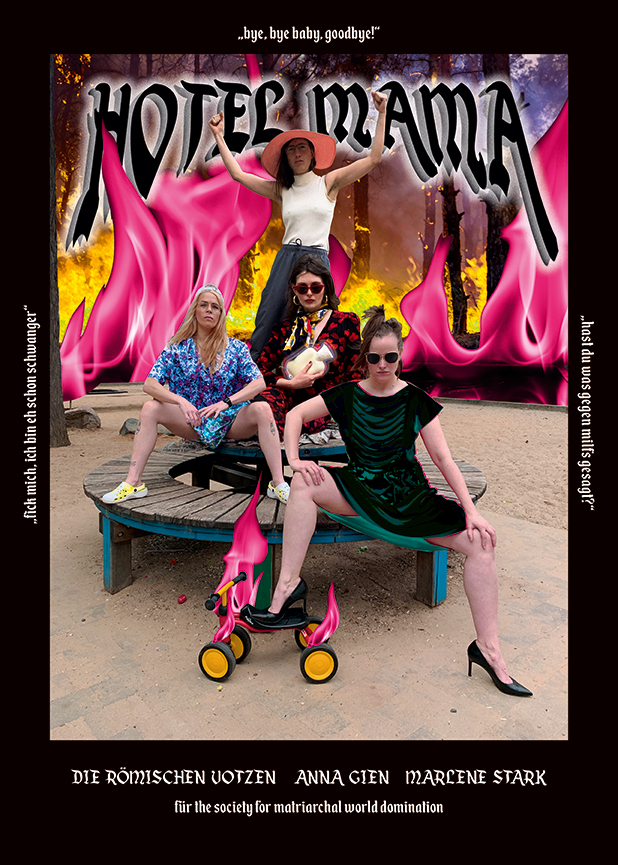 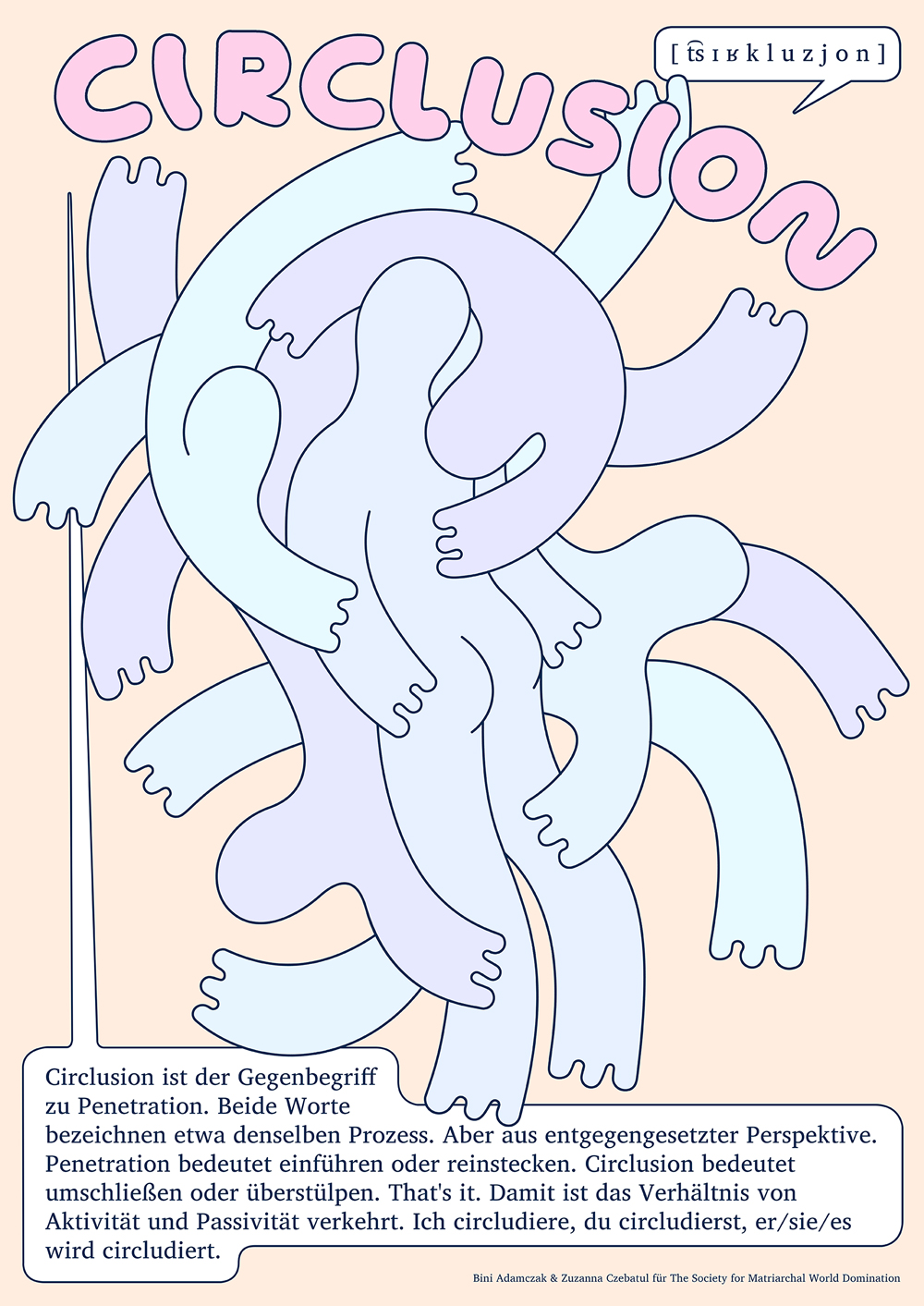 Bini Adamczak works – preferably not too much – as an author, visual artist or theater maker. She writes on political theory, queer politics, and the past future of revolutions. She studied philosophy in Frankfurt and now lives in Berlin where the nights are long but the sun is weak. Schmitt/Adamczak recently premiered Everybody Needs Only You. Liebe in Zeiten des Kapitalismus at HAU in Berlin.

Julieta Aranda’s work spans installation, video, and print media, with a special interest in the creation and manipulation of artistic exchange and the subversion of traditional notions of commerce through art making. As an editor of e-flux journal, and co-director of the online platform e-flux together with Anton Vidokle, Julieta Aranda has developed the projects Global Contemporary Travel, Time/Bank, Pawnshop, and e-flux video rental.

Vela Arbutina is an interdisciplinary artist and designer. She has been given the most beautiful swiss books awards, exhibited at the Dutch Embassy Berlin, Kunstverein Düsseldorf, Gallery Silberkuppe Berlin, NASA Amsterdam, Kunsthall Oslo, Gallery West Den Hague, redesigned Girls Like Us Magazine and published several issues between 2009-2012. She studied at Central Saint Martins,  Gerrit Rietveld Academie and Institut Kunst.

Sharmila Banerjee is an illustrator, comic artist and graphic designer based in Berlin. Her work has been described as pleasantly surreal, naive, playful and seemingly friendly but with unsettlingly gloomy implications. There is an urgency in both her autobiographical work and her fantastic stories in exploring relationships between humans, to reveal character flaws and the misery in daily-lived experiences. Her comic series Girlie was published in Missy Magazine. She is currently working on a picture book and an exhibition coming up in spring 2020.

Candice Breitz (born in Johannesburg, 1972) is a Berlin-based artist. Throughout Breitz’s career, she has explored the dynamics by means of which an individual becomes him or herself in relation to a larger community, be that the immediate community that one encounters in family, or the real and imagined communities that are shaped not only by questions of national belonging, race, gender and religion, but also by the increasingly undeniable influence of mainstream media such as television, cinema and other popular culture.

Zuzanna Czebatul is an artist living and working in Berlin. Her practice blurs the lines between commercial product, architectural relic and artistic production, with objects and installations that often investigate relationships between the viewer and the viewed. Her installations appear collapsed, destroyed, deflated or fragmented and question concepts such as monuments, public edifices and symbolic architecture. Reality and artificiality are in constant dialogue in her work, as she tries to expose the fluidity or flexibility of politics, the art market or the human body. Ultimately her work addresses power structures, ideologies and politics and asks the question: how do we want to live?

Selin Davasse (born 1992, Ankara) lives and works in Berlin. Her performance practice is based on researching, recontextualizing and reimagining rhetorics, semiotics, music and art histories. She develops empowered (anti)heroines embodying various concepts, narratives and theories which are condensed, fragmented and destabilized, and presents her research in the form of staged lecture-performances with sound, video and text components.

Die Römischen Votzen (The Roman Cunts) is a rap group founded in 2013 in Venice and consisting of the members Sonja Yakovleva, Giulietta Ockenfuß and Anna Hjalmarsson. Their songs are inspired by autobiographical topics such as afternoons in the sauna, casual drug use and male pregnancy. Their last mixtape ‘UNDEZENT 2’ was released on cassette and includes the hit tracks ‘Sauna’ and ‘Kaffee’. Die Römischen Votzen are also visual artists with recent exhibitions in the galleries Robert Grunenberg Berlin and Parkhaus-wk-16 in Frankfurt.

Lena Marie Emrich is a conceptual artist living and working in Berlin. Emrich’s works dig into marginal, social practices and intervene in their related objects, be they pimped cars or for instance a receptionist’s desk. She studied Sculpture at Kunsthochschule Berlin Weißensee and took part in the Studio for Spatial Acitvities of Miroslaw Balka in Warsaw. Emrich has exhibited her work at institutions including Spoiler in Berlin, Kunsthal Bergen in Norway, Kunsthalle Osnabrück, Bubenberg Gallery in Paris. In 2020 she will have a solo show at the Kunstverein Göttingen curated by Tomke Braun.

Aisha Franz is an illustrator and comic book artist. In her work she likes to combine everyday experiences with bigger existential questions only to reveal in the end that the world we live in is very confusing. She has published several short stories and three graphic novels, with her latest one “Shit Is Real”, nominated for the L.A. Times Book Award. Apart from drawing she loves to travel to graphics festivals with her self-published zines and is co-running the collaboration project and publication series CLUBHOUSE with Berlin-based publisher Colorama.

Nina Franz is a cultural theorist, writer and curator living in Berlin. She currently teaches at the Media Department at Bauhaus-University, Weimar, where she organized the international lecture series “The Coming Catastrophe” as a platform to formulate responses to the climate crisis. She is finishing a PhD at Humboldt-University, Berlin. In 2017/2018 she co-organized the exhibition “A Better Version of You” in Seoul and Beijing in cooperation with the Goethe-Institute China and South Korea.

Marlene Stark is a Berlin based sound artist, producer, DJ and writer. Music is the main element of her her work as an artist and writer. Stark is a resident DJ at Sameheads and at Cashmere Radio with her show SUPERPOSITION. Since 2017 she has been working on her debut album, which will be released on Lustpoderosa, Zürich 2020. In 2019 her first novel, “M,” written together with Anna Gien, was published by Matthes & Seitz Berlin.

Anna Gien, born 1991, is a writer based in Berlin. She writes fiction, essays, poetry, as well as a monthly column. Besides her writing she works in the context of theater productions and artistic collaborations. 2019 her debut Novel “M” in co-authorship with Marlene Stark was published with Matthes & Seitz Berlin.

Gabi Kachold-Stötzer was born 1953 in Emleben. In 1976 Kachold-Stötzer took part in a protest against Wolf Biermann’s deprivation of citizenship, for which she was sentenced to 12 months imprisonment. She co-founded the Erfurter Frauengruppe, the first female artist collective of the GDR, and directed the art space Galerie im Flur until the Stasi shut it down. In 1989 she was an active participant in the citizens movement in the GDR. Kachold-Stötzer lives and works as an artist in Erfurt, creating multi-disciplinary works: painting, photography, film, artist’s books, and texts.

Born in Spain, Chus Martínez has a background in philosophy and art history. Currently she is the Head of the Institute of Art of the FHNW Academy of Arts and Design in Basel, Switzerland. Before she was the Chief Curator at El Museo Del Barrio, New York. She was dOCUMENTA (13) Head of Department, Chief Curator at MACBA, Barcelona, Director of the Frankfurter Kunstverein. For the 56th Biennale di Venezia, Martínez curated the National Pavilion of Catalonia; her most recent exhibition The Metabolic Age (MALBA Buenos Aires) serves as a preamble for a book of the same title she is currently working on.

An iconic feminist musician, producer, director, and performance artist, Peaches has spent two decades forging a bold, sexually progressive path through popular culture that’s opened the doors for countless others to follow. She first catapulted to international stardom with her “surreally funny [and] nasty” (Rolling Stone) 2000 debut, “The Teaches of Peaches,” an album which upended stereotypes and embraced taboos as it introduced the world to Peaches’ raunchily explosive persona. Since then, she’s released five more critically acclaimed albums.

Viva Ruiz is the daughter of Ecuadorian immigrants and a community and nightlife educated advocate multi-disciplinary artist living and working in New York City. The goal of all the work is to destroy white supremacy and to exorcise the colonial / colonized mindset. Two recent notable highlights: programming sex education and practical spirituality workshops as a curator for the New Museum’s “Scamming the Patriarchy” youth event and “ProAbortion Shakira: A Thank God For Abortion Introspective,” a solo show at Participant Inc with collected works and conversations within the multimedia abortion de-stigmatizing concept. #thankgodforabortion